So I didn’t run and technically, this wasn’t a race but I felt like it was significant to share the dirty details of my husband’s almost 60 mile run to raise money for Type 1 Diabetes. In short…

In case you missed it, the background info can be found here and below is the map of the route that he took. He had to wear two watches since the battery would have died on the first one before he finished*. If you add the totals between the two watches, he recorded 59 miles, although the map says it was 60. It took him about 10 hours and 15 minutes including all stops to eat, refill water bottles, etc. All in all it was pretty incredible! 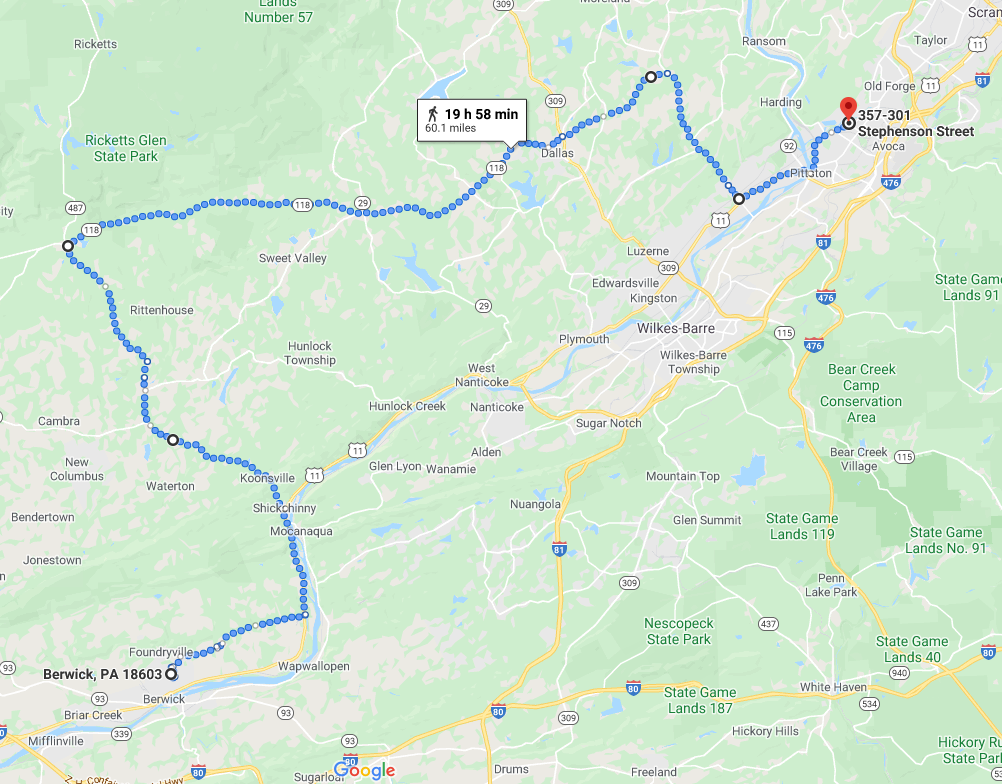 A run like this is no small feat and if it had been a race, there would have been volunteers at aid stations and medical tents, etc. Since this was a solo run, I decided Marty needed a crew. We had two cars that “followed” him along the course and provided his hydration and fuel every few miles. The first car was driven by my FMIL (Favorite Mother-In-Law) aka Marty’s mom. This was her first time “crewing” for an event like this and she was fabulous! She had banners made (by Brian Wood! Thank you!) so people passing by knew why there was a runner on the highway. She coordinated the cheering sections, kept everyone in the loop throughout and prepped a bunch of running fuel (sliced oranges, got sports drinks, etc.). She was key to pulling this off.

I was her co-pilot and navigator. I also played photographer and social media reporter for our friends and family who couldn’t be there. Finally, I supported Marty in the same way he always supports me and was his corner-man, making sure he had everything he needed.

In the other crew car were my mom and dad. Dad drove and followed Marty during the dangerous parts where there was no shoulder, talked down the cops**, provided words of wisdom and encouragement at exactly the right moments since he is an incredible and experienced runner in his own right. Marty told me mutiple times how comforting it was knowing my dad was following him and had his back. ‘He was spot on. The whole time. I just felt safe and comfortable running knowing he was behind me.’ Marty told me afterward. My mom navigated for my dad, also did a bunch of race prep and nearly pulled an all-nighter to be there for him. She also took some amazing photos and as an experienced race crew coordinator, kept us all sane and on track.

The run started at 5:15 am from Berwick Middle School. It was a small group with just our crew and Marty’s Uncle Stosh there to send him off but there was a palpable excitement in the air. As soon as he started, we jumped in our cars and started following him with only the headlights and a flashing beacon light on top of the truck*** lighting our way. About an hour into the run, the sun came up and it was beautiful. If you ask Marty, he’ll tell you he doesn’t even remember the first ten miles because it was dark and the lights were trance-like.

In Shickshinny, he came across his first monster hill, nearly a 20 mile climb, actually. We were all in awe, and perhaps even enjoying watching him run the scenic route. We were just praying the fog would stick around for a while before the hot sun decided to rear it’s ugly head. Around mile 34ish, Marty was surprised with his first of many cheering sections. His dad was there. His sister, Adrienne, and her husband Josh were there with our three month old niece, Shelby. Along with some other amazing family members and friends. The closer he got to the finish, the more family and friends he had come out to support him and keep his spirits up.

By the end, we were all getting loopy. While I was waiting for Marty to conquer the last of the “monster hills” I decided I should be doing something too and started doing push ups by the side of the road. Later, Marty’s cousin Dave (who is also a personal trainer) decided to match my effort with some push ups of his own as Marty ran by him, around mile 50. In Marty’s own recap, he told me he was even “feeling loopy” by the end. As any ultrarunner will tell you, towards the end of a long day of running, delirium starts to set in. I’ll tell you though, that delirium quickly turns into elation when you hit that finish line.

Before we got to the finish, we had to stop at Sabatini’s Pizza. If you know Marty, he is extraordinarily passionate about good pizza. Naturally, he planned the route so it would pass right by his favorite pizza joint****. It was great stop, his whole immediate family was there along with our friend who married us. With only about 6 miles to go, it was special to say the least.

Before Marty could cross the finish line, he had to cross the bridge into Duryea. My parents pulled off an almost impossible feat and got him the fuel he needed just at the end of the bridge. Then, he told me he “wanted to see me one more time before the finish” so 1.6 miles out, he stopped for water and one more kiss before the finish. When he went on running from there, I texted my parents and said, “1.6 miles out” since they were standing at the finish with an amazing group of family and friends. My parents let everyone know that he was close and FMIL and I tried to drive faster through town than Marty could run (luckily, she is really good at that).

We arrived at the finish and I was a nervous wreck. We couldn’t really see him coming because after the last turn to where we were, he had less than a block too go. I kept looking at my watch trying to anticipate when he would be coming around that corner. My dad, saw how anxious I was and said, “You want me to run to the corner and see if I can see him coming?”. “Yes!! Please!” I said, the with the anticipation almost unbearable. So Dad ran to the corner and as soon as he got there, he started waving his arms to signal Marty was coming*****. Moments later, Marty turned the corner and ran straight into my arms. It was sweaty and completely gross but still probably my favorite kiss other than our wedding day.

Martin’s Run for Type 1, in the books!

Epilogue: So this wouldn’t be my blog if I didn’t talk about my blood sugar a little bit. During Martin’s Run, I woke up at 2:30 am, ate only food we had packed in the car for the 10+ hours of the run and then treated myself with wings and an alcoholic beverage or two afterwords. End result….

I was over the moon to say the least! Not to mention my average sensor glucose was 116. Not too shabby! Stay strong Diabuddies!

*This is a common ultramarathon problem.

**Yes, we got stopped by the cops. Luckily, they let us off with a warning.

***Thanks to our bother-in-law, Josh Sutton!

****As much as pizza is difficult to dose for, Sabatini’s is worth the hassle.

*****Dad said afterward about Marty, ‘That guy is a metronome. He didn’t see me, so he wasn’t putting on a show. He was just smooth and comfortable, cruising along. You would have never known he just ran 60 miles.’ Coming from someone who has completed 25 marathons and completed an ultra, that is a complement that you can’t take lightly.

****** Too many asterisks? Probably, but I have to share the newspaper article on Marty’s run too! You can find it here!

So this run really brought us back to our R2C days. R2C, aka River 2 Sea, is a seven person relay race from the Delaware river to the Atlantic Ocean. Most years, it was a team including my brother, sister, Marty and my Dad among some other amazing running friends. Our team name was always “6 Donkeys & 1 Old Ass”. I’ll let you guess who the “old ass” was but at Marty’s request, I had to include a picture of my dad running to the finish, one of the years we did that race. Whether its a 60 mile solo run, or a 92 mile relay, it takes a team effort to succeed (much like T1D). We succeed, conquer and thrive together! Find your tribe, they will get you through anything!

Did I use an abbreviation or term you haven’t heard before? Check out my post on T1 & Athletic Lingo!

The content on this site is not intended to be medical advice. Always consult your doctor before beginning a fitness regimen or adjusting your diabetes management strategy.

This site uses Akismet to reduce spam. Learn how your comment data is processed.